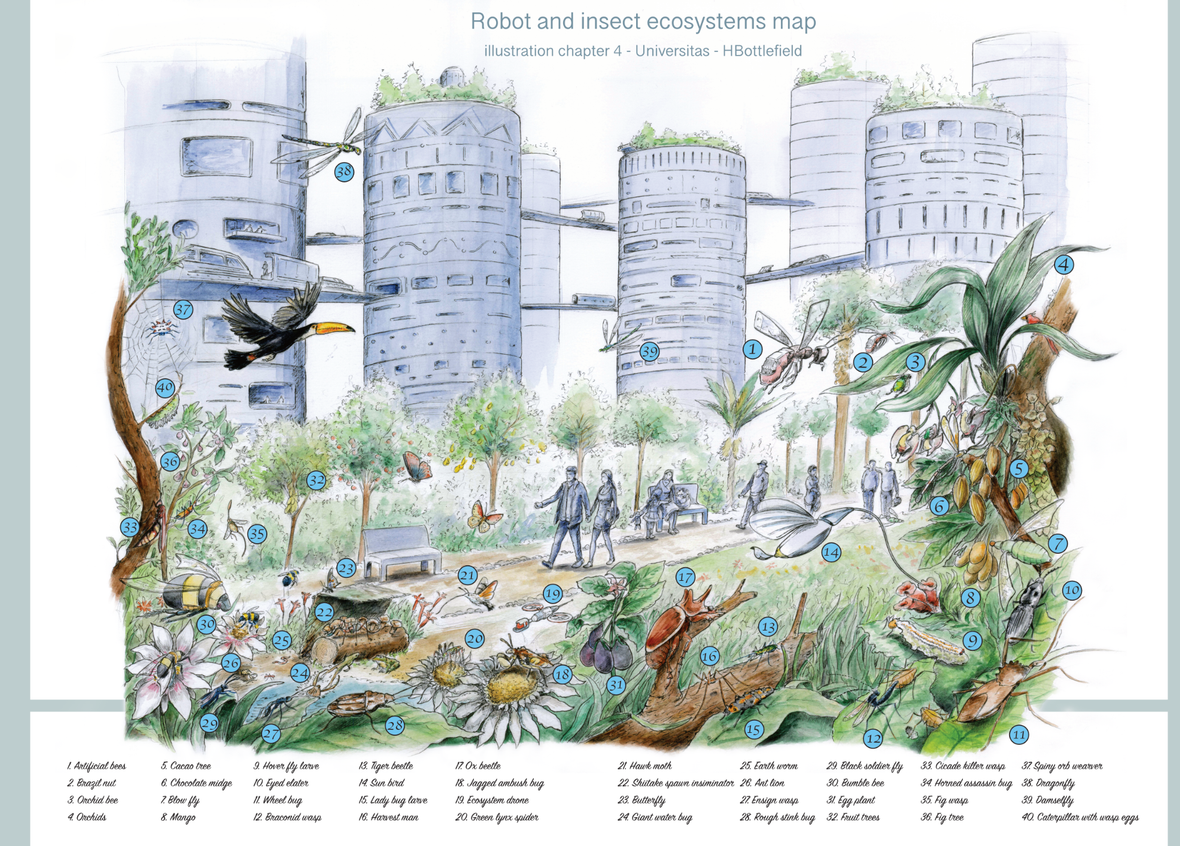 The loss of insects due to pesticides

For decades, mankind used chemicals to control pests. Due to long-term use of herbicides and pesticides, 55% of the insect varieties got extinct.

The micro-environment of the geodesic domes is used to help restore insect populations and to reintroduce lost species. Insects, spiders and bugs, studied here play a crucial role in controlling pest populations. The goal is to learn the role of each insect within an ecosystem. The knowledge is also used to design artificial robots with insect DNA.

The robot is the no 1 pollinator and is responsible for approximately 80% of the pollination of fruits, grains and vegetables in the domes.

This robot is constructed so it resembles the anatomy of the chocolate midge. With its tiny body it infiltrates the cocoa flowers and helps pollinating and cultivating the precious cocoa beans.

This robot is designed to pollinate fruit flowers. This particular one helps pollinating the mango tree flowers.

9. Larvae from the hover fly

The population of hover flies declined because insect was not able to survive toxic insect sprays. It is beneficial because it hunts aphids. The larvae captures them with its jaws and holds them in the air to let the body content drain.

The larve of the eyed elater is a ferocious meat-eater that dines on many noxious larvae. For instance the ones from the wood boring beetle and many undesirable flies.

Wheel bugs are valuable because they hunt on unwanted caterpillars. They catch their prey with the long forlegs and paralyze it with a saliva they plunge into the body of their victim.

Aphids are a true pest for plants. Luckily there are these wasp-formed insects to help control aphid pests. The adult female wasp lays an egg in the aphid nymph. Once the egg inside the aphid hatches, the wasp larva consumes the aphid from the inside.

The tiger beetle literally waits hidden away for its pray , lunges and grabs its target just like a tiger. They can run down their target. They feed on pests and in turn they are food for beneficial animals.

The sunbirds are just like humming birds nicely looking colorful pollinators. The anatomy of the sun bird was an excellent inspiration to design robotic birds that can help with pollinating a variety of flowers.

A ladybug larva eats up to 50 aphids a day and some species eat up to 300 a day. So they are real eating machines. They are the ultimate partner for pest control and they were already used in the 20th century to control aggressive pests in the monoculture plantations.

Most of the time harvest men are sitting motionless on the upper sides of leaves waiting to ambush a soft-bodied pest insect. On its turn the harvest man is on the menu from large beneficial spiders and birds.

Ox beetles are beneficial because they have a specific role in decomposing and recycling. The large white larvae their diet consists out of rotten wood and dead vegetation. Their role is important because they help to bring plant material back in the ecosystem.

The ambush bug is a highly efficient garden predator that buzzes around from flower to flower. It paralyses its victim and liquefies the body content into a soup. With a straw shaped organ it slurps the fluids out of the victims body. It kills preys such as harmful species but also honeybees.

In Phoenix dome you will see small size drones buzzing between the plants. They have built in detectors that help them identifying insects. They gather data and help us to understand what specific role the tiny creatures have within an ecosystem.

Study results showed that the green lynx spider feed themselves on lots of harmful pest moths. But using it for pest control depends on where and what sort of crops you want to culture.

Most moth are nocturnal and are restricted to drink nectar from mostly white flowers that open at night. They have excellent olfactory systems to locate flowers during night time. Hawk moths are long distance flyers and bring the pollen they collected to flowers far away from where they got them.

On a log in the shadow mushrooms are cultivated. Shiitake needs cellulose/lignine to convert into nutrients and gets it from decaying wood. The small robotic inseminator holds spawn from shiitake inside its body. It nfiltrates its tail inside a log and inseminates the spawn. After a while fruiting bodies arise and after a year the mushroom has colonized the log.

Butterflies are also important pollinators. Once they land on a flower to feed they collect pollen on their long and thin legs as they walk around the flower clusters. The majority of butterflies got extinct during the past century. In the domes there are lots of "butterfly projects" meant to reintroduce lost butterfly species.

It's body design makes it a formidable predator, extremely well-suited for hunting. Its forelegs are tipped with hook-shaped claws to grasp and hold its prey. With the hind legs, the bug grabs a plant close to the surface and it snatches a passing prey. They eat mosquito larvae but also crustaceans, tadpoles, salamanders, fish and frogs.

This humble creature will maybe overlooked if one talks about beneficial critters but its contributions to a healthy soil are numerous. Earthworms aerate and loosen the soil by digging tunnels and bringing mineral rich subsoil to the surface. Their work results in improved overall soil structure and plant growth. The tunnels make it possible to allow oxygen to penetrate deeper, which helps beneficial soil bacteria.

The ant lion in its larva stage is predatory. It construct a conical pit where its prey got entrapped. The ant lion waits at the bottom of the pit for an insect to slip on the loose sand. Then it falls right into the jaws of the insect.

Ensign wasps are parasitic. Their young develop inside egg cases of cockroaches. The females lay an egg in the cockroach egg case and the wasp larva consumes the egg of the cockroach.

The rough stink bug is a beneficial predator that preys on caterpillars, plant eating larvae of beetles, adult beetles, aphids and other harmful soft-bodied insects. They are excellently camouflaged and closely resemble the color and texture of tree bark on which it lives.

The larvae of the black soldier fly grows in manure. It helps with manure management. It helps to reduce accumulation of manure. They digest the organic compounds faster then it could decompose. They convert manure into nutrients, its called bioconversion. And if a high population of black soldier larvae is active it discourage pest flies to lay their eggs in the manure.

Bumble bees got almost completely extinct. In Phoenix Dome recovery programs help to reintroduce the bumble bee. The robot bumble bees became important pollinators for clover, alfalfa and vetch during the absence of the real bumble bee. They are also used to help pollinate a rich variety of fruits.

This large wasp is a beneficial insect in the control of the noisy cicadas. They are only to be seen in the summer months when cicadas are active. Then the female flies out and searches cicadas, kills them and brings them to her nest to provide food for her larvae.

The horned assassin bug its colors mimic the colors of the milkweed bug. These bugs are harmless and taste bad. This is some clever camouflage because large predators will avoid it and preys are not alarmed if they see one. The bug has a unique proboscis that it uses as a weapon. The sharp stylets in its proboscis are used to puncture its prey and seconds later to inject saliva to paralyze the meal.

Though fig wasps are not extinct yet, the concerns where high that this pollinator of fig trees would become extinct. Therefore artificial versions like the one shown here, were designed. It mimics the complex pollination proces of fig fruit and helps to keep sustaining ecosystems.

The spines of this spider have an anti-predator function. This small spider weaves small round shaped webs in shrubs and trees. Once its prey is caught in her web it determines the exact location and size of the victim and it immobilizes it. If the victim is small the spider carries it away and if the prey is too large, she will wrap it. Spiders help to control the overpopulation of insects.

Dragonflies are fierce hunters that just like hawks have very good eyesight and great speed. In its immature stage it is an aquatic nymph that hunt mosquito larvae but also large animals like small fish. It was already hunting its victims 300 million years ago.

The damselfly is from the same order ,"Odonata", as the dragonfly. They help control populations of harmful insects, they consume large quantities of harmful flies, mosquitoes and moths. They live and breed nearby fresh water and are an important pollution indicator.